How is the sound ?

This 5-tracks LP was released on vinyl on Nasoni Records in the beginning of December. But I think we, that little community of heavy-fuzzy sounds lovers, didn’t talk about it enough ! Maybe the release was submerged by all the TOP 2014 lists that were posted at that time…

And with Deadpeach it’s time to go come back to my favorite genre : Heavy Psychedelic Jams ! Starting right from the beginning with its 2 longest tracks, it directly sets you in the move. “Calcutta” has that hazy atmosphere directly putting your brain into transe-mode, listening to the lead guitar, largely abusing on the fuzz and the reverb, and supported by an enchanting bass line and some sweet guitar chords… It’s already time to close your eyes…

“Gold” is in the same highly psychedelic vein for the first half of the song, but you have a deep feeling that something is coming right after … Indeed, a Dead Meadow-like fuzzy riff pops in to end into another great guitar solo, just for the pleasure of your ears !

“The Line“, the shortest track on the record, clearly having a more groovy feeling, rising the tempo from the 2 previous ones. It’s a nice song for the middle of the album to wake you up in the middle of your dreams

“Stomper” is mainly a magnificent drum solo with some Bonham patterns, supported by some weird psychedelic shit done by the guitar to hook you in ! A killer stomping bass line comes in at the end of the solo before giving place to the beginning riffs to end the song, looks like “Moby Dick” no ?

The last song “Traffic” is clearly my favorite, the guitar melody is beautiful and reminds me a lot of the last album by Monomyth (ranked #7 in my Top 2014 List). The flow of the song is so smooth, like if you were sailing on the middle of the Amazon river !

Take the trip, you’ll love it !

Why is this album worth listening ?

In what situation you should listen to this album ?

Sitting on the exact same spot the photo above was taken, and just enjoy the view and the music ! If weed is also your thing, then why not, it can’t harm

Something particular to note ?

The cover is stunning ! I’d love to have it on a giant poster in my bedroom ! 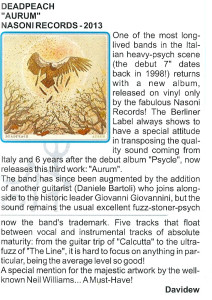 you can buy the new vinyl ‘Aurum’ here

‘AURUM’, Deadpeach’s third studio album is out now!!!
Meanwhile the family increased with the entry of a new support guitarist.
Deadpeach is a heavy fuzz psychedelic band, where vintage guitars generate mantric and lysergic atmospheres,
together with a old-fashioned big drums and some of the most magmatic bass lines, producing a mix of stoner rock and trippy moods.
A succession of riffs and solos is going to take you by the hand to the lands of nowhere!

The vinyls have landed at the base, and they look very cool! 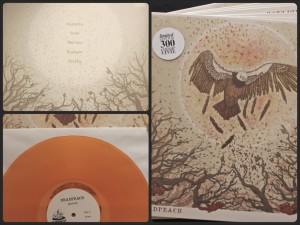